This street scene made me nostalgic for my country the Philippines. I remember as school kids in uni hanging out on the streets like this while waiting for the bus/tricycle or just hanging out with friends. And this is under the scorching sun too.

Email ThisBlogThis!Share to TwitterShare to FacebookShare to Pinterest
Labels: Mexico

Kiev, 2011
I saw this photo from hubby's files, taken last time he went to Kiev. I was chuckling as I can't make out what's on top of the car. They don't look like tents, luggages or other camping equipment to me...appears like wires of some sort.
The blurry shot was an effect of the car's glasses, not to clean! lol. The husband went to a business trip but he appears as though he was going to camp. He took his camping bag instead of the usual sturdy traveling bag. He said he doesn't need one that's too big and settled for the smaller but somewhat firm and okay to use too.

He later on posted a photo of it, wet from he said he doesn't know kind of something. lol. So much for camping equipment, bags and that...I'm just glad he survived 5 days without me and that he took lots of photos! :D
Posted by  gmirage at 7:31 PM 2 comments: Links to this post

Email ThisBlogThis!Share to TwitterShare to FacebookShare to Pinterest
Labels: Kiev

gmirage
Wants to be: A linguist, a traveler, a photographer, a writer, a cook, a painter....but by the end of the day... will always be a mother, a wife, a believer... The waters connecting Alaska and Canada offer the most picturesque sights. It has a calming effect too.

Email ThisBlogThis!Share to TwitterShare to FacebookShare to Pinterest
Labels: Alaska 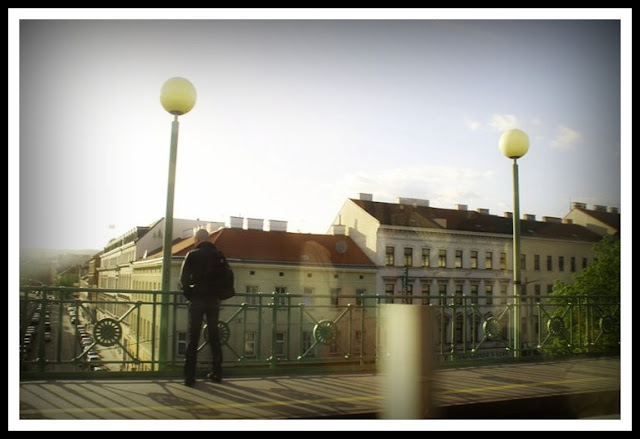 I saw this guy as the train left the station, he seems to be deep in thought. The train station is elevated and he was looking down on the vehicles below. There was a metal divider by the tracks that I caught on cam...the man was standing on the other side of the platform...
Posted by  gmirage at 8:18 PM 14 comments: Links to this post

gmirage
Wants to be: A linguist, a traveler, a photographer, a writer, a cook, a painter....but by the end of the day... will always be a mother, a wife, a believer...
Newer Posts Older Posts Home
Subscribe to: Posts (Atom)

Drive By Photography is a blog for shots taken while inside a train, bus, car or tram (moving or not) (Drive by). It is a challenging task as the glasses and movement gives the photos a little kick.

Thanks to the co-authors of this blog; Photo Cache and Syel.

Everyone is welcome too to contribute their own 'drive by' shots. Please email photos, including name, url, date photo is taken and the story behind the photo to mirage2g(at)gmail.com.

Send one now and have your link placed on the Contributor's page. Thanks!

in a reader or